March 28, 2020
Trending
Home Health News Two dozen new cases of coronavirus were reported in the US over the weekend – CNN

New cases of the virus were announced in Oregon, Rhode Island, Washington state, New York and Florida on Sunday, bringing the US total to 89 as of Monday morning, up from 65 on Friday night.
The new cases prompted emergency declarations in at least two states and sparked new warnings. Schools in the Seattle area, Portland area, and Rhode Island all announced closures for cleaning this week after presumptive positive cases linked to either students or staff.

At least 18 new cases were announced across the country on Sunday, including the first two cases ever reported in Florida.
Those cases involve one resident of Hillsborough County who tested positive and has a history of travel to Italy. The other is an adult in Manatee County who also tested positive but had no history of travel outside the US, a statement from the Florida Department of Health said. Both were in self-isolation as of Sunday night and will remain isolated until they are cleared by health officials, the statement said.
“This is the scenario that we prepare for every day in public health,” Florida Surgeon General Dr. Scott Rivkees said in a statement. “The Department is moving forward with the appropriate plans, and we are working directly with the Centers for Disease Control and Prevention (CDC) and local medical providers to ensure these individuals receive the proper treatment and that anyone who has come into contact with them is following the necessary protocols, limiting or stopping any further spread.”
Florida Gov. Ron DeSantis declared a public health emergency as a result of the cases, a memorandum from his office said.
An emergency proclamation also was issued in Washington state, where both US deaths from the virus occurred. Washington Gov. Jay Inslee declared a state of emergency after the first death was confirmed on Saturday in King County. The patient was a man in his 50s who had underlying health conditions, Dr. Jeffrey Duchin, health officer for Seattle and King County said during a news conference on Saturday. He said he and other health officials were made aware of the case on Friday.
The second death was a man in his 70s who suffered from underlying health conditions and died Saturday, Seattle & King County Public Health said in a news release.

At least 6 cases linked to one facility

The latter patient was one of four new cases confirmed Sunday among residents of a long-term nursing facility in Kirkland, Washington, where officials have been investigating a possible outbreak of coronavirus.
The patients were residents of the Life Care Center, where a cluster of cases were reported starting Saturday.
More than 50 residents and staff from the facility are experiencing symptoms, and will be tested for coronavirus, Duchin said. The facility has about 108 residents and 180 staff members, he said.
The investigation was sparked after two people linked to the facility — a resident and a health care worker — both tested positive for the coronavirus, Duchin said. 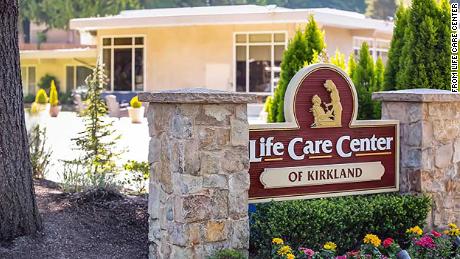 As of Sunday night, 13 people have tested positive for the novel coronavirus in Washington state — 10 of them in King County and three others in Snohomish County — according to health officials.
Duchin said it is likely more cases will be discovered.
“We believe that these are cases of community acquired transmission,” Duchin said. As health officials test more, “we’ll likely find more cases,” he said.

More cases from coast to coast

Meantime, five new cases were announced in northern California Sunday — three of them in Santa Clara County.
One patient was a woman who had underlying health issues and was hospitalized. Two others were a husband and wife who had recently traveled to Egypt, according to a news release from the Santa Clara Public Health Department.
The new cases brought the total number of cases in Santa Clara County to seven.
Alameda County and Solano County each had one resident test positive for the virus, a joint news release from the counties’ health departments announced. Both are health care workers who were exposed to a patient at UC Davis in Sacramento, the release said.
More than 120 UC Davis health care staff were in self-quarantine after possibly being exposed to the patient admitted to the medical center last week.
A second case was also reported in Oregon on Sunday. The Washington County adult had close household contact with the state’s initial case and did not require medical attention, the Oregon Health Authority said in a news release.
New cases were also announced in Rhode Island, the first two in the state. An adult female and a teenage girl were both diagnosed with the virus, Rhode Island Health Officials announced. They had traveled to Europe on the same trip in mid-February, according to a news release from the Rhode Island Department of Health.
New York Gov. Andrew Cuomo announced in a statement Sunday night that a woman in her late 30s had been identified with a presumptive positive case of coronavirus in that state. The woman contracted the virus while traveling abroad in Iran. She has respiratory symptoms but is not in serious condition, the statement said.
The patient went to the hospital in Manhattan and remains isolated in her Manhattan home, a New York State Department of Health spokesperson told CNN.
“There is no cause for surprise — this was expected. As I said from the beginning, it was a matter of when, not if there would be a positive case of novel coronavirus in New York,” Cuomo said.

CNN’s Jamie Gumbrecht and Melissa Alonso contributed to this report.

Get all the latest news on coronavirus and more delivered daily to your inbox. …

Welcome to another edition of What Fresh Hell?, Raw Story’s roundup of news items that …