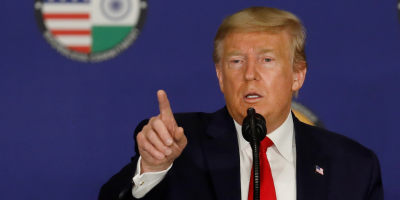 President Donald Trump downplayed concerns about the novel coronavirus during a Tuesday morning press conference, saying, „The whole situation will start working out.“

Just a few hours later, officials at the US Centers for Disease Control and Prevention said the American public should prepare for the spread of the flu-like virus in the US and that it „might be bad.“ While Trump said Tuesday that there were „probably 10“ infected people in the US, the CDC said 57 people have been diagnosed with the virus in the US.

„It’s not so much of a question of if this will happen in this country anymore but a question of when this will happen,“ Dr. Nancy Messonnier, the director of the National Center for Immunization and Respiratory Diseases, told reporters. „We are asking the American public to prepare for the expectation that this might be bad.“

Democrats and even some Republicans began lashing out at the president and his administration’s response to the virus.

House Speaker Nancy Pelosi on Tuesday called Trump’s Monday request for $2.5 billion in emergency funding to combat the disease „long overdue and completely inadequate to the scale of this emergency.“

The Trump administration hesitated for weeks to pursue the „supplemental funds“ but shifted course as COVID-19 accelerated outside China on Monday and financial markets dropped sharply.

„Our state and local governments need serious funding to be ready to respond effectively to any outbreak in the U.S.,“ Pelosi tweeted. „The President should not be raiding money that Congress has appropriated for other life-or-death public health priorities.“

Senate Minority Leader Chuck Schumer accused Trump of having „no plan“ to deal with the virus‘ spread and argued he was exhibiting „towering and dangerous incompetence.“

Democrats also attacked the president for cutting significant funding and staff from the federal government’s pandemic-response teams, including the CDC’s global-health division and the National Security Council’s global-health-security unit.

Schatz accused Trump administration officials of lying about the severity of the threat posed by the virus to prevent further drops in the stock market. The market continued its drop on Tuesday after the S&P 500 fell 3.4% on Monday, its biggest drop in two years.

„I cannot imagine anyone more ill equipped to prevent a global pandemic,“ Schatz said of the president in a tweet. „This is when having some knowledge of and respect for government and science is essential.“

Sen. John Kennedy of Louisiana accused acting Homeland Security Secretary Chad Wolf of not knowing enough about the virus‘ spread in the US and the ways it can be contracted.

Trump previously said the coronavirus, which has infected a confirmed 77,000 people in mainland China, would naturally disappear in the spring „as the weather starts to warm & the virus hopefully becomes weaker, and then gone.“

This morning’s classified coronavirus briefing should have been made fully open to the American people—they would be as appalled & astonished as I am by the inadequacy of preparedness & prevention.

Gina Heeb contributed to this report.